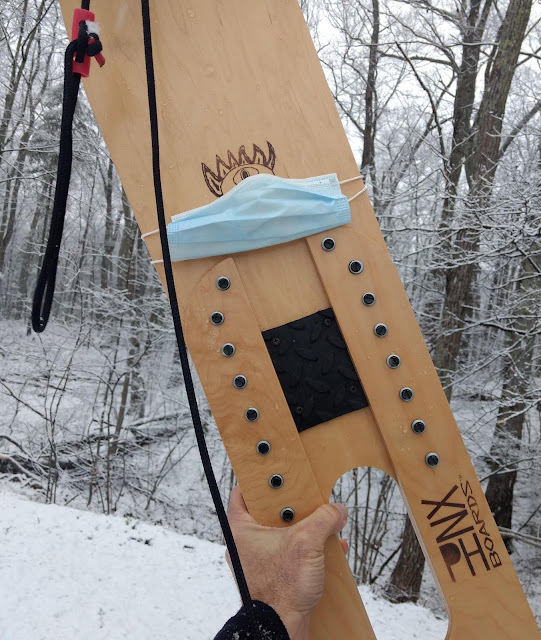 Until the snow started today in Boston, snurfing was the last thing on my mind.  In fact, I hadn't checked my PHNX email account in a week or so.  When I did, I found an email from a few days ago from PHNX rider Phil up in VT, along with a couple of photos.  He titled them "last run?" suggesting that spring really was here and snurfing would be over.   Funny thing, the photos could easily have been taken at the beginning of winter, when those first flakes fly and PHNX riders are some of the first to enjoy what all boarders crave: sliding on snow. 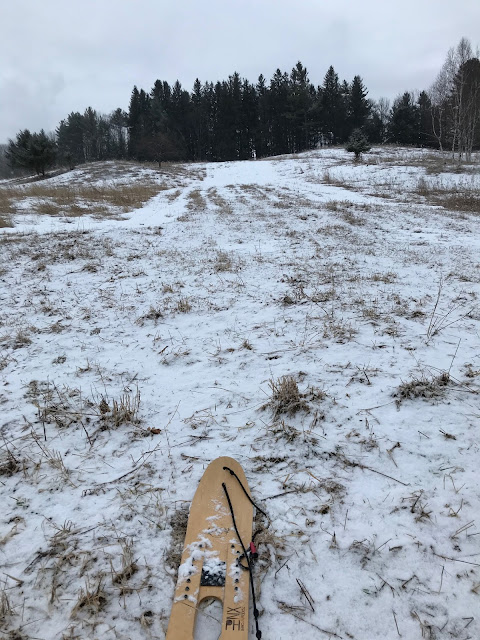 As I looked out my window from self-quarantine, I noticed the snow accumulating and realized this might actually be more than just a flurry, and yes, I might even be able to snurf tomorrow.  And then it occurred to me that snurfing is probably one of the last sports that folks can do while we all social distance. The ski resorts held out as long as they could and now are all closed for the season.  But, that's not to say the snow is over! Anyone lucky enough to be near a hill and still have snow, or receive a few inches like we have, well, what better thing to do than get outside and enjoy.  In fact, I may just try and slip away to a ski mountain and poach all that terrain  sitting there untouched.

As for the photo of my Trailblazer with the face mask covering PHyrclops, our mascot?  First of all, I'm not a hoarder, that's just a cheap workshop mask we use when we handcraft our boards.  But, is it sensational, taking advantage of a crisis to sell boards?  No, this is just the reality of the situation we are in.  And frankly, along with a sense of humor, we all need ways to get outside and get fresh air and if we can help in any way, we've done our job.  Fresh air has a new meaning, doesn't it?  Every breath of untainted air is precious.  Get outside and appreciate it, snurfing or not.

Posted by Phireclops at 4:09 PM No comments:

One thing ALL snowboarders/skiers should have 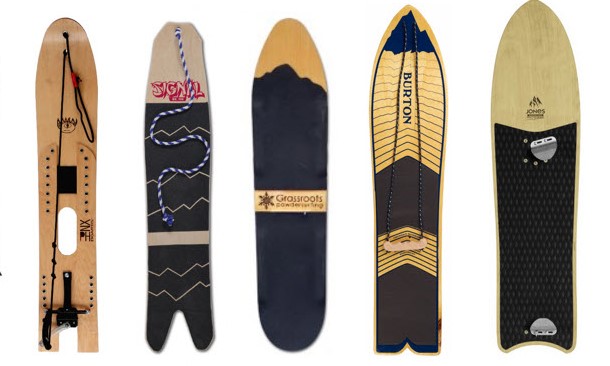 It's amazing at how many snowboarders and skiers don't even know what a Snurfer is, despite it's having been around for 50 years, and despite a resurgent interest, with dozens of companies offering new versions.  Sure, snurfing became snowboarding and for a lot of people there was no looking back.  But, whether you snowboard or ski, if you love fresh tracks on new snow (the ultimate goal for most people!), you're missing out big time if you don't have a snurfer.  The idea that a snurfer is for little kids or people who can't afford to go to a resort is just wrong.  Why would anyone want to limit their access to snow, if there were products available to make it happen?  A storm comes in and you aren't heading to the mountains?  Grab your snurfer and get some runs in at any hill nearby..FOR FREE! (hey, rich people like free too, no?). 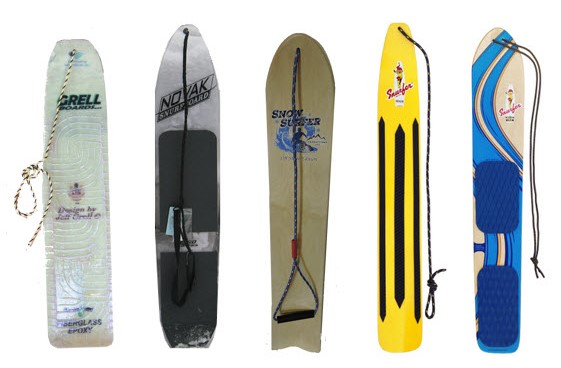 Shown in these two photos are ten versions of snurfers, although Jones and Grassroots call theirs pow surfers, being designed wider for the deep powder snow mostly found out West.  The others are more traditionally designed narrower for the 2 to 8 inches more common to snow storms in the Northeast and Upper Mid-West.  Just like snowboarders and skiers may have multiple sets of equipment, snurfers (used here as a verb) often have a few versions too, especially since snurfers (as a noun!) are so much less money than snowboarding and ski equipment.

Most snowboarders and skiers spend hundreds and thousands on resort riding near and far, driving and flying all over with the hope of getting good snow.  Yeah, groomers are fun too, but ask 100 riders what are the best possible conditions and 99 of them will say "Fresh POW!".  The sensation of riding in powder snow is unparalleled, whether it is two feet in the back bowls of Vail (at $209 A DAY!!!) or two inches in ANY back yard or back hill (at $169 for LIFE with a PHNX Board!!!) and with the swings of climate change it may become even more rare.  Now, more than ever, snow riders everywhere should be snurfing!

So, all you snowboarders and skiers, all you SNOW RIDERS, RISE UP AND SNURF! 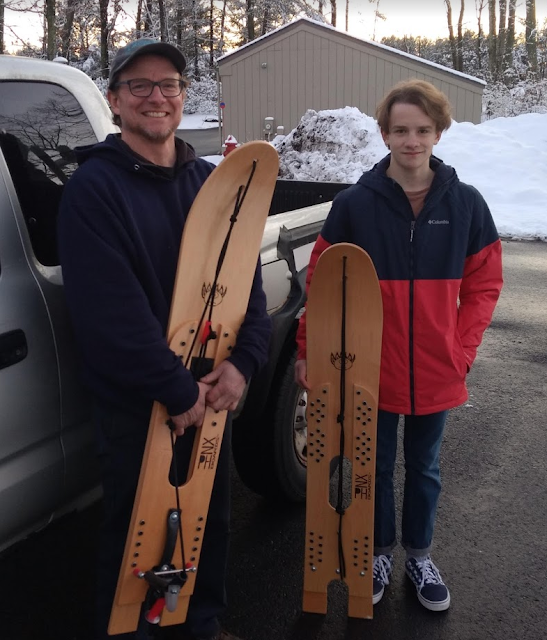 No, not Harvard University, Harvard Massachusetts, a rural town outside of Boston with lots of great hills for snurfing!  And by graduate we mean Jim Burns and his son came by the PHNX Boards factory (aka basement workshop!), where they learned some history and production secrets.  And, instead of useless diplomas, they left with two brand spanking new boards, a Trailblazer for dad and an UNPLUGGED for his son, which they plan to use up in those Harvard apple orchards (in fact, one of our own PHNX videos was shot in Harvard a few years back: you can watch HERE ).

Truth be told, Jim broke his first board, an early version of the Trailblazer, somehow snapping it in two up front, where the foot bed meets the base.  He said he was just pulling too hard on the Rip-Cord, which shouldn't break the board (the base is 7 hardwood plys!), but then again, not everyone builds up their muscles so much by building car engines for a living!  Jim builds/rebuilds vintage and historic sports engines up in Ayer, and some day we hope to stop by for a tour of his shop.  Anyway, being a DIYer, Jim considered repairing the board somehow, but instead we offered him a great deal on some new boards (yeah, that's what happens when you stop by!).

Thanks and Best Wishes to the new graduates as they continue their studies of all those cool FREE places to snurf in the 'burbs! 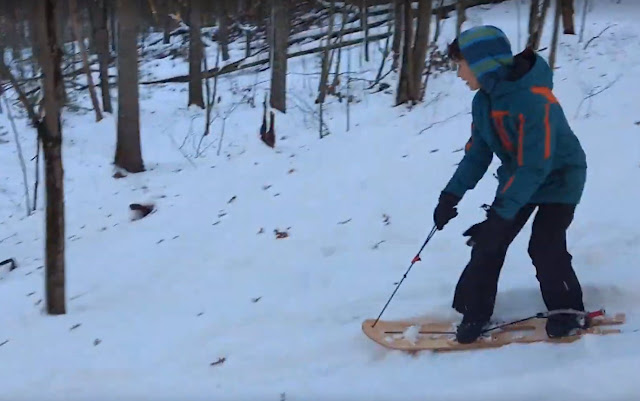 Gabe Blumberg on a PHNX Trailblazer...blazing trails in the woods behind his home in Lincoln, Ma.  And by FREEstyle we do mean FREE, since there aren't any ticket turnstiles or RFID readers in the woods, just snow, squirrels, birds...and yeah, watch out for the trees! 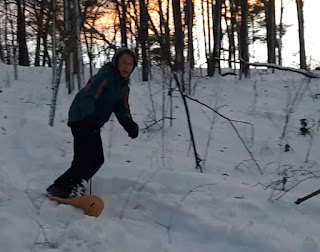 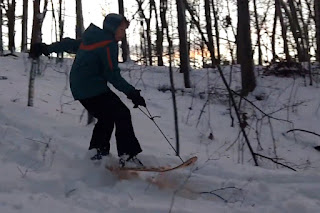 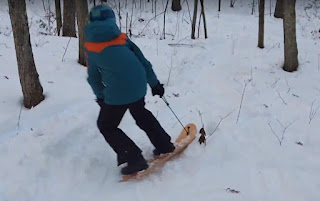 As a skier, skateboarder, soccer player and all around active kid, Gabe is quickly figuring out how to ride a snurfer, and why a PHNX Board gives you more control.

5 years ago or yesterday? Snurfing Boston!

Snow finally arrived in the Northeast and the snurfing has begun.  Frankly, we spend more time snurfing than videoing so until we post a new one, here is one of my favorites.  Arnold Arboretum in Jamaica Plain, just outside the city of Boston.  Tremendous hill begging to be snurfed and so few people doing it.  Boggles the mind, really, since once you have a board it's FREE and so much fun.  A LIFETIME PASS for the cost of a PHNX Board!  Great exercise, challenging, and fun.  If you ski or snowboard at a resort, after you spend hours getting there, spend a fortune, and wait in lines, you are lucky to get those precious fresh tracks in powder snow.  With a snurfer you get fresh tracks every time and you can snurf anywhere there is a hill and a couple of inches of snow.

DANG, what are you waiting for?   Snurfing is alive and well, and great for any age.   C'mon and join us!

BTW, this was filmed with a DIY 360 camera rig.  A bit of a balancing act but some cool video, huh?
Posted by Phireclops at 2:22 PM No comments: 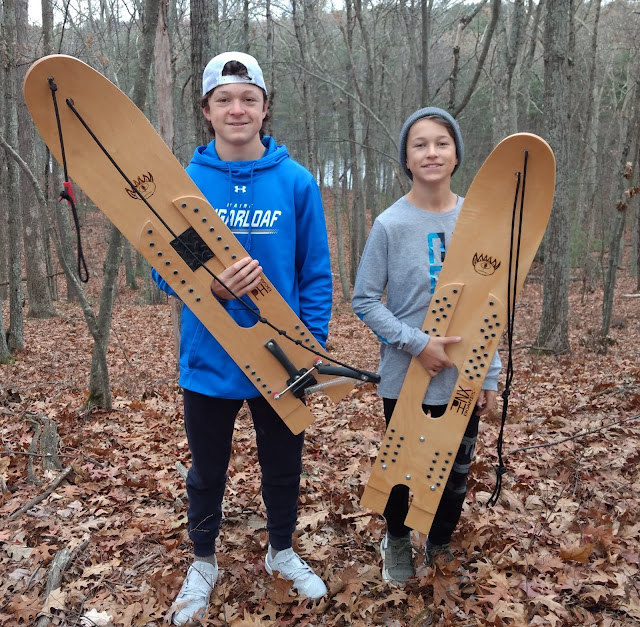 OK, so there's no snow yet in the Boston area where these two PHNX riders live, but they're certainly ready to ride when the first flakes fall.  And, as PHNX riders know, it only takes a couple of inches before the "rope drops" on all that FREE terrain!  Pictured here, Josh with a Trailblazer on the left and Gabe with an Unplugged on the right.  Two fired-up guys with some pretty cool snurfers ready to rip the woods behind them!

So, what does it take to be a PHNX Team Rider?  Well, mostly you just have to be psyched to turn off the TV, put down the cell phone, (yeah, and maybe blow off the homework for a bit!) and do pretty much anything outside in the winter!  In addition to snurfing the woods and hills in the area, you'll find these two skating, kite-skating, ice-sailing, playing pickup hockey, and skiing.  Ten degrees outside and a blizzard?  Bring it on!

Once the snow hits, we're looking forward to some action shots and videos of Josh and Gabe.  Do they really have what it takes to take on the PHNX PHounder?
Posted by Phireclops at 2:52 PM No comments: 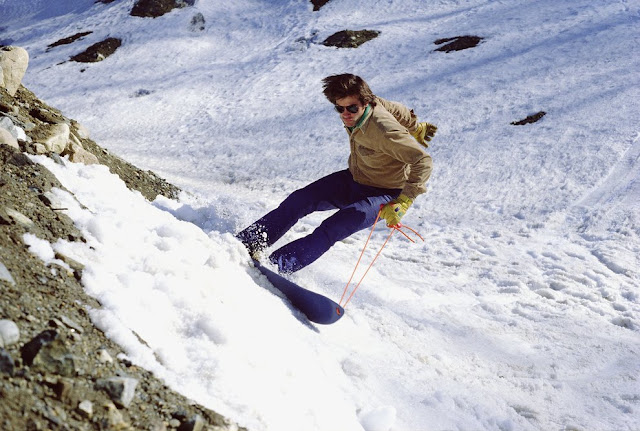 After recurring bouts of cancer over a span of eight years, Jake Burton Carpenter lost the battle on November 20, 2019.  The world has lost a truly inspiring person.  While there were many inventors of snowboarding, there is no question Jake was the most influential and successful, and most responsible for making it into the worldwide sport it is.

No doubt there were many who tinkered with their Snurfers back in the 70s to make them better by adding platforms, rubber straps,etc. Except Jake stuck with it and in the process changed the world of snow sports forever. He was the rare visionary who sees the future and has the tenacity and courage of his convictions to get us there, for the benefit of all.  Jake may be gone, but his legacy remains: bringing joy to so many people by creating products that help us discover and appreciate the outdoors in winter time.

If you want to know just how remarkable and full a life Jake lived, read his timeline posted on Burton's website:  Jake Burton Carpenter

RIP Jake!
Posted by Phireclops at 10:37 AM No comments: